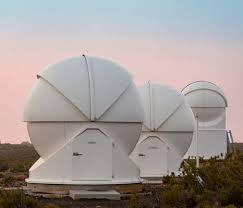 Dr Nic Erasmus, an astronomer from the South African Astronomical Observatory (SAAO), discovered a new comet in September, while monitoring the output of the ATLAS telescopes in Hawaii. ATLAS is the Asteroid Terrestrialimpact Last Alert System, an early warning system for asteroid impacts developed by the University of Hawaii and funded by NASA. It consists of two 0.5-metre telescopes situated 160 kilometres apart at the Haleakala (ATLASHKO) and Mauna Loa (ATLAS-MLO) observatories on the islands of Maui and Hawaii, or ‘Big Island’, respectively. The two telescopes automatically scan the observable sky for asteroids that might pose a threat to Earth, while their CCD cameras capture images that are processed by software optimised to detect fast-moving objects.